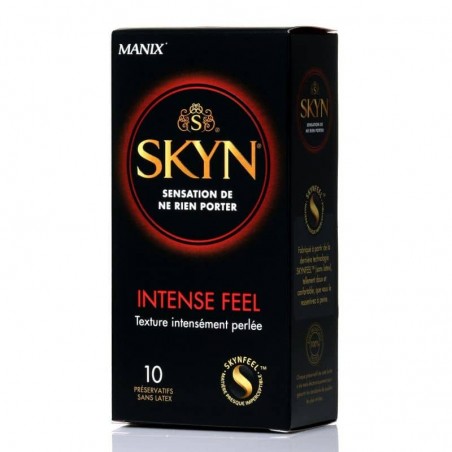 The stimulating Skyn condom without latex for those who want to enjoy the benefits of Skyn Original with an intensely beaded texture.

Manix Skyn Intense Feel condoms are renowned for their exceptional quality, high level of safety and optimal comfort of use. They were subjected to rigorous quality controls and were manufactured according to strict manufacturing procedures. That’s why they have a reputation for being perfectly reliable. Made from polypropylene, an almost imperceptible material with a highly beaded texture, these condoms are formulated without natural rubber latex, making them perfect for people allergic to latex.

Composition : Does not contain natural rubber latex, recommended for people with allergies to latex.

Instructions for use : Before use, read the printed instructions inside the box carefully. Check that the condom packaging (plastic foil or aluminum foil) is not opened or damaged, and check the expiry date. Keep in a cool and dry place, away from direct sunlight.